In 1971, West Chester University established the Gordon Natural Area.  But, for the next thirty-five years there were no staff positions assigned to the Gordon, although the Grounds Department took responsibility for keeping the road and trails cleared of downed trees.  In 2007, the University appointed Dr. Gerry Hertel as the first Stewardship Manager (a half-time position).  Gerry continued in this capacity until his retirement in 2014.  At that point, long-time GNA intern Kendra McMillin was appointed as Interim Stewardship Manager.  Subsequently, in 2016 Dr. Nur Ritter became the new Stewardship Manager.  In 2017, this position became full-time.

From 2007 onwards, numerous WCU students have been employed as Student Interns at the GNA and have contributed tremendously to the work at the Gordon.  Below, are brief biographies of the current staff and interns and of the most recent 'former interns'.  We're hoping to continue to add descriptions of former staff and interns, as time permits, so please check back as we continue to update the page. 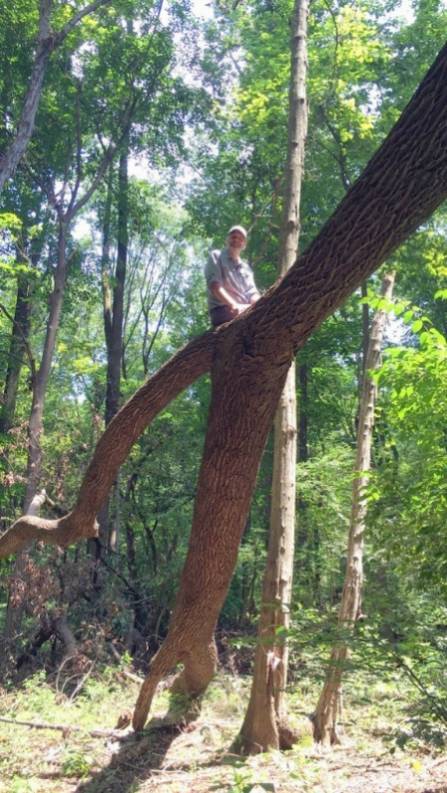 Nur Ritter became the second Stewardship Manager of the GNA in January 2016.   Nur received a B.S. in Botany from the University of New Hampshire in 1993 and a Ph.D. in Natural Resources from the University of New Hampshire in 2000. His doctoral research entailed a country-wide survey of aquatic vegetation and habitats in Bolivia, and focused on evaluating plant species diversity and phytogeographic relationships in a wide range of wetland types.

Before attending university, he worked for 20+ years as a carpenter and contractor.  After earning his degrees, he worked as a restoration practitioner for the CSU Stanislaus, Endangered Species Recovery Program (ESRP) for seven years.  During this time, he participated in all aspects of the design and implementation of a large-scale habitat restoration study on retired agricultural land in the San Joaquin Valley (California).  Subsequently, he returned to New Hampshire where he was employed as a Restoration Ecologist by the New Hampshire chapter of The Nature Conservancy.  Nur has also worked as a Contract Botanist and as a self-employed Database Developer. 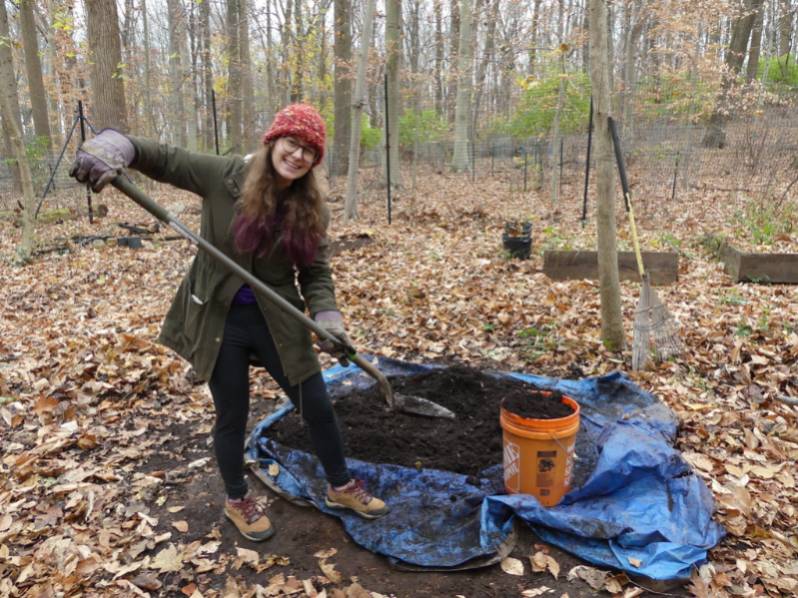 Kathryn inoculating biochar by mixing it with compost and fungal spawn

Kathryn is currently attending WCU and will receive a B.S. in Biology with an Ecology and Conservation concentration in May of 2023. In Spring of 2021 she transferred to WCU from Montgomery County Community College. She began working in the Gordon Natural Area in Fall of 2021. While in the Gordon, her natural artistic side surfaces when she spots various forms of biota and captures them in photographs. She aspires to have a career that incorporates both of her passions for art and biology. When not in the Gordon, you can find Kathryn foraging and eating mushrooms, tending to her plants at home, or spending time with her friends and family. 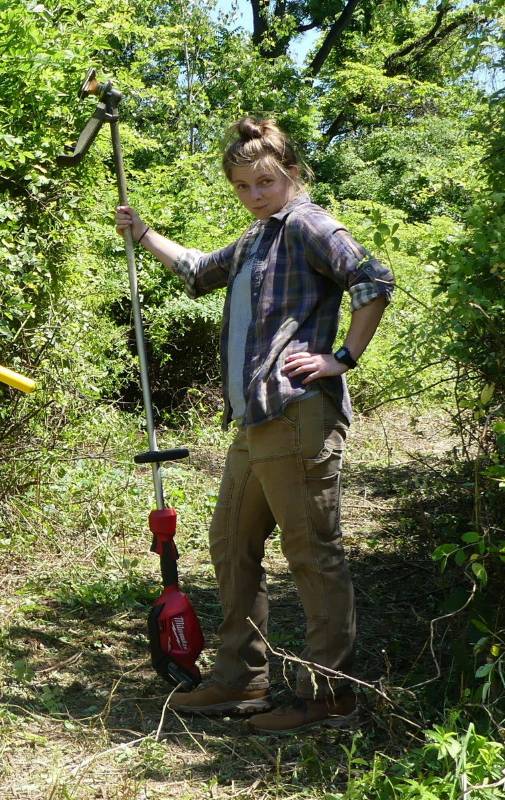 Madison is a Senior Geography Major with a Minor in Psychology. She began working at the Gordon Natural Area during the summer of 2021 after transferring to West Chester in 2020 from Colby Sawyer College in New Hampshire. At West Chester Madison is also an intern at the South Campus Gardens and a member of the Women’s Rugby team. Previous to coming to WCU she lived in Oregon and then worked at Quechee State Park in Vermont as a park ranger where she was able to develop a wide range of experience working outdoors.

Madison is hoping to continue being able to work in nature through a career in environmentalism or forestry after graduating in 2022. 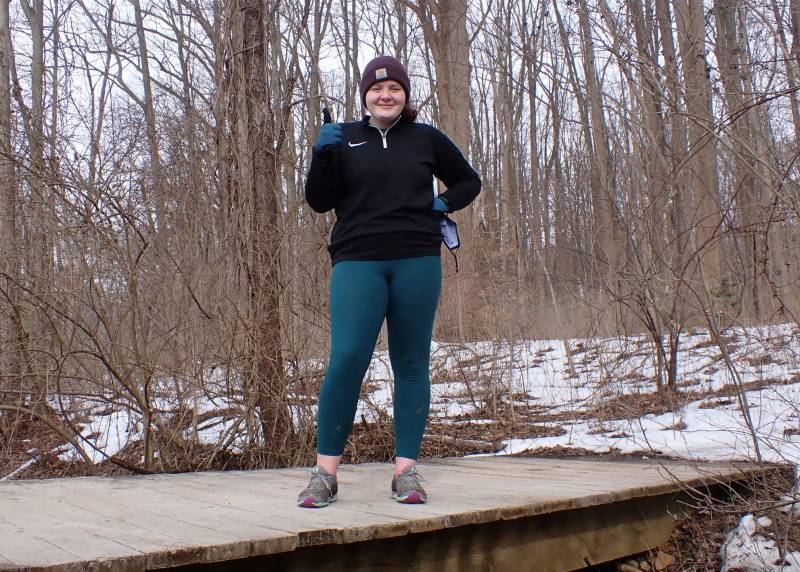 Maeve was a Senior Urban and Environmental Planning Major with a Minor Geographic Information Systems. She began working at the Gordon during the Spring Semester of 2021 and worked until at the GNA until she graduated after the Fall 2021 semester.

On campus Maeve was a member of the Abbe’s Society, Student Government Association and worked at Sykes Student Union. In her free time, she enjoyed reading, painting, and hiking and anything that kept her outside. Maeve had a very strong interest in how to incorporate environmentalism and sustainability into urban environments and she hoped that her experience at the Gordon will help prepare her for a career in environmental planning in the future. 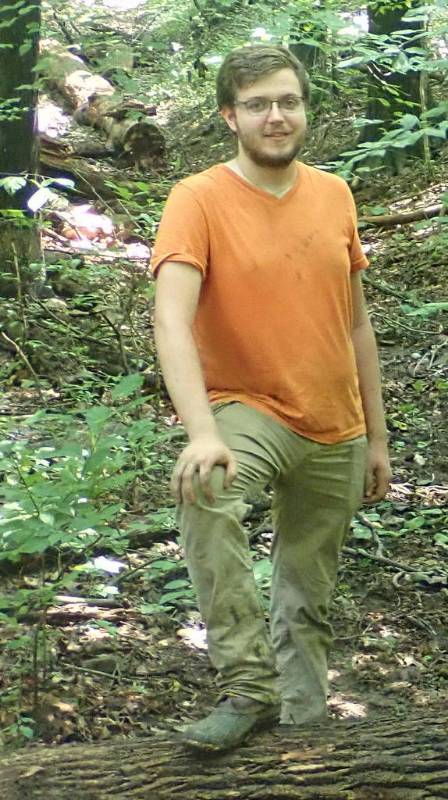 Noah was a Biology Major concentrating in Ecology and Conservation with a minor in Geography and Planning. He began working at the Gordon in the summer of 2019 and continued working at the GNA until his graduation in 2021. In addition to interning here at the GNA, Noah worked at the Learning Assistance and Resource Center (LARC) as a BIO 100 and MAT Q20 tutor and played Lead Trumpet in the WCU Incomparable Golden Rams Marching Band.

Noah enjoys reading and taking care of his ferns during his free moments. When Noah graduates, he hopes his experiences at the GNA will prepare him for a career in restoration ecology. 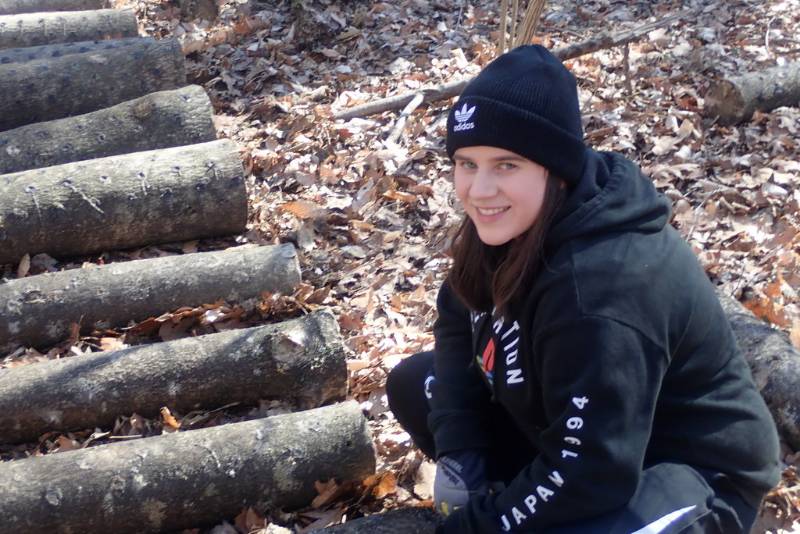 Rachael began work at the GNA in the spring of 2020 and continued working with us until her graduation in the Spring of 2021. She also spent time volunteering at Bowman’s Hill, a native plant nursery, and caring for her own dozens of plants.  For her Senior Project, Rachel analyzed the first two years of data from the Seedling Exclosure trails at the GNA.  Currently, Rachel is actively pursuing a career in the field of conservation biology. 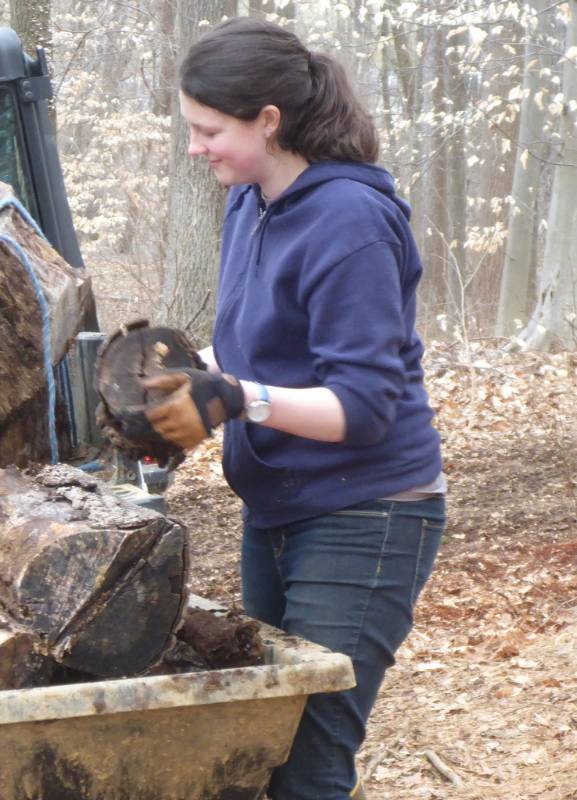 Paige Vermeulen helping relocate log rounds that had been laying alongside the PECO right-of-way, while contemplating the meaning of life

Paige was an intern at the Gordon from February 2018 until her graduation in 2020.  While at WCU, she double-majored in geoscience and ecology and also had experience as the president of the on-campus E.A.R.T.H Club, and as an intern for the local environmental group Don’t Spray Me. Paige hopes to work as a natural park geobiologist while remaining active in the sustainability community. 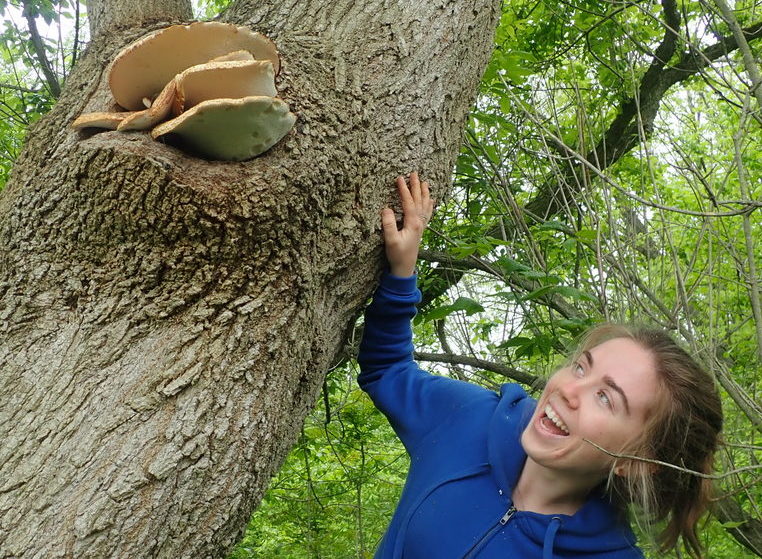 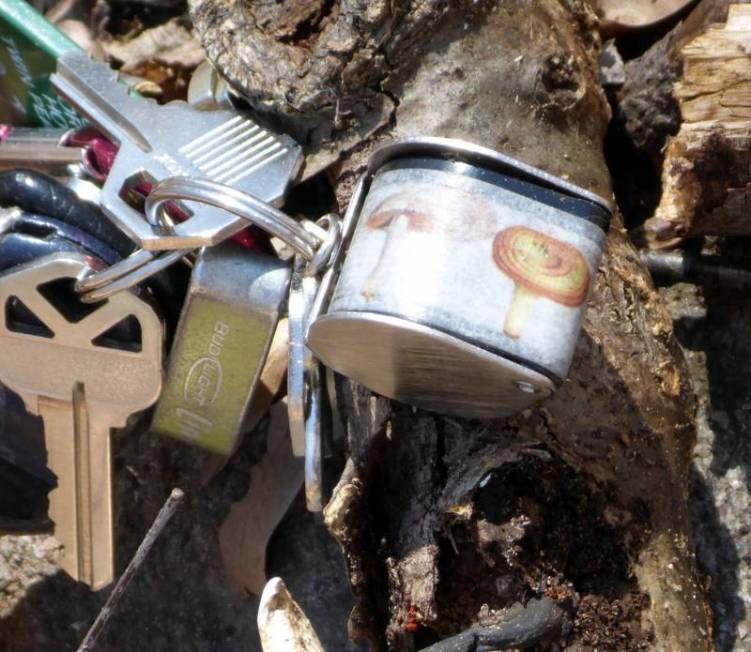 Maribeth Beatty first worked at the Gordon as a volunteer on Arbor Day/Earth Day 2017.  She became a Student Intern in February of 2018 and continued working at the GNA through the Spring of 2020.  At that time, Maribeth obtained her B.S. in Biology with a focus on ecology and conservation biology.

Maribeth will always strive to be a well-rounded naturalist, but has dreams of specifically working with and/or studying trees in the future.  Since the fall of 2020, she has been employed as an arborist with Davey Tree Expert Company. During her college career, Maribeth also spent time interning at Tyler Arboretum (Summer 2018), and with WCU Professor Jen Chandler surveying rare plants in West Virginia and Pennsylvania and researching the Spotted Lanternfly in Pennsylvania (Summer 2019). 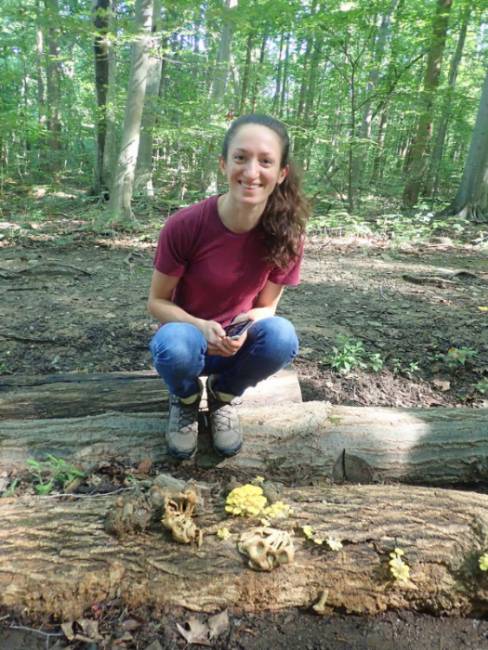 Ariana was a Student Intern at the Gordon Natural from the summer of 2019 through December of that year, at which time she graduated with a B.S. in Biology, with a concentration in ecology and conservation.  She is hoping that her experience working in the GNA will better prepare her for a career in conservation or park services.  In her free time, Ariana can be found trotting around the GNA and other local parks, or going on rock climbing trips to various places along the east coast.

In addition to the many tasks that Ariana took on at the Gordon, she also achieved lasting fame for portraying (and creating the costume for) the fearsome Giant Spotted Lanternfly (see video below). 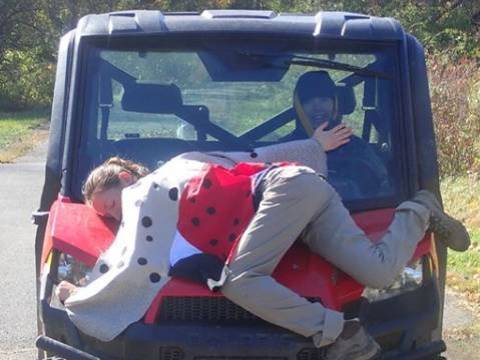 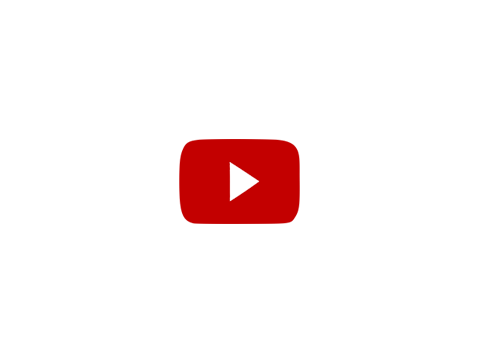 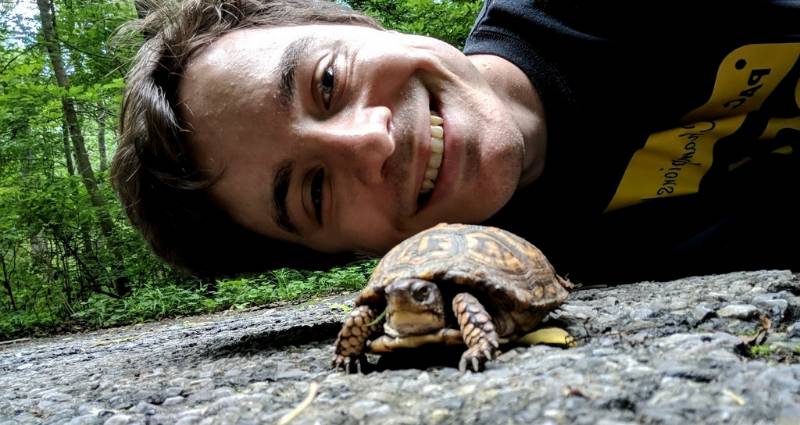 Former GNA Intern Jared Kline with 'Honest Abe', one of the GNA's many Eastern Box Turtles